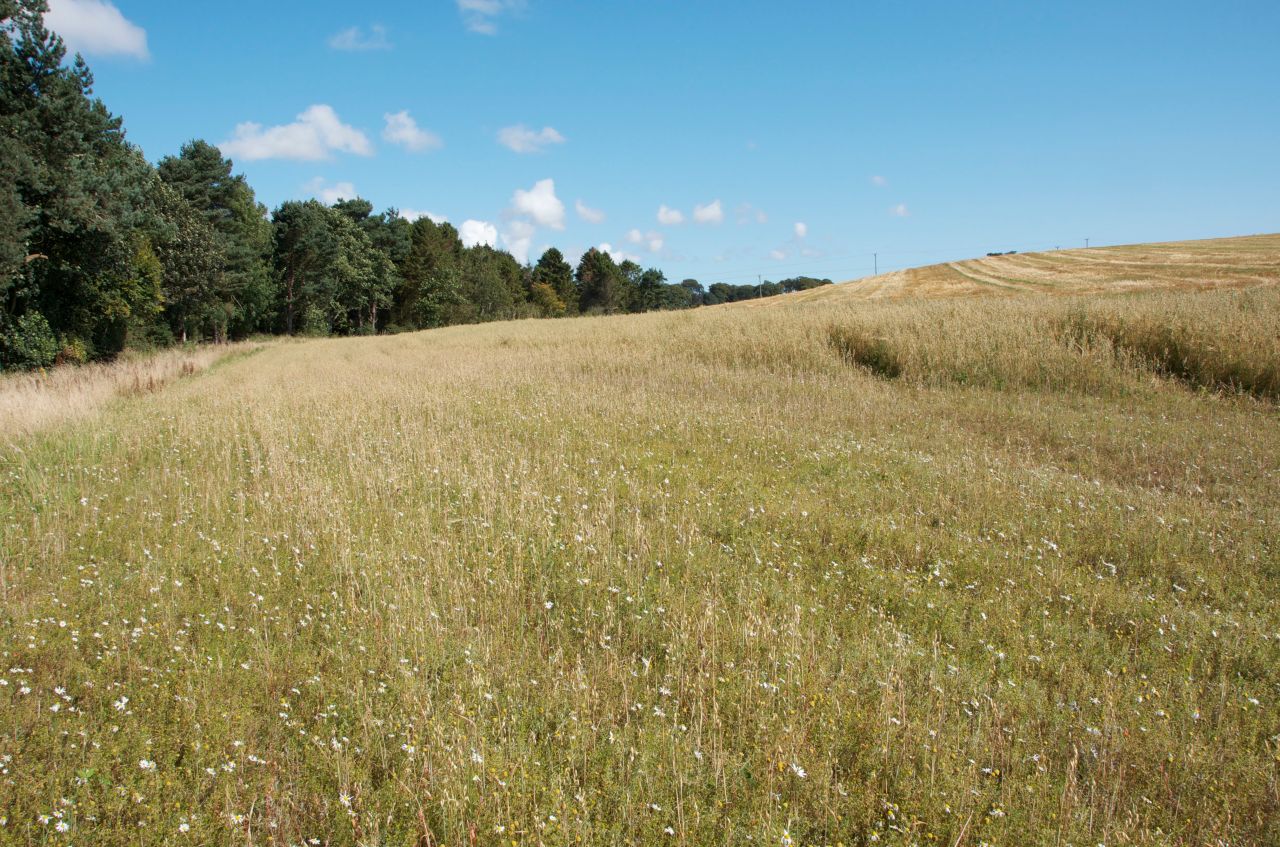 It was down at Kilconquhar Castle in Fife . . .

In fact we were staying in a timeshare with friends and they had picked up one of those walking routes from the main office.  The route left from the estate, through fields to St Monans and then back along the shore to Elie before returning to the estate. The whole route was 6.5 miles and so should have taken us a comfortable three hours allowing for a break.

We had a small hiccough at the start ; we could see the track we needed over the wall at the back of the house, but there was no way through. Even if we could have climbed up the wall there was an eight feet drop the other side down into stinging nettles.  Still, we didn’t mind the half mile detour to get back to where we started, as it was  such a beautiful day.

Having left the estate, we happily walked along a typical country lane full of hawthorne and brambles, waving to our house as we passed.  Not long after our house we found a gate back into the estate. Yes, if we had gone right instead of left out of our front door, we could have saved that half a mile! At least we had sussed it for the way back. 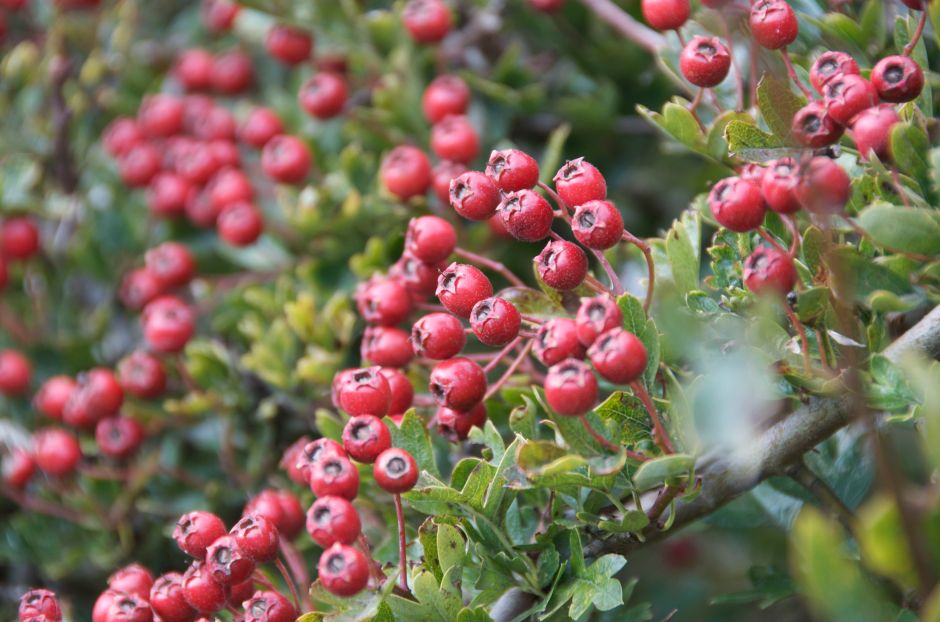 We soon found the  footpath that led away from the track and  out across fields.  We had one anxious moment when a herd of cows all turned to look at us and one started moving in our direction.  Despite being well used to fields of cows in my childhood, I immediately started looking for escape routes. Could I squeeze under that barbed wire in an emergency?  Luckily they didn’t see us as a threat and resumed their grazing.

The next tricky bit was when the route map told us we needed to head towards a thicket of trees to our left.  We could see no way through the barbed wire and over the stream.

Now, there are many miles of well laid out and signposted walking routes in Scotland, but this wasn’t one of them! I wish I had a pound for every local walking map, or even book, that I had tried to follow which bears little resemblance to the actual landscape.

In Scotland, and to a lesser extent in England, we have what is commonly known at a ‘Right to Roam’. This allows us freedom to walk, cycle or even ride a horse over any land with a few exclusions. It also allows us to swim, canoe, sail or row down every waterway – a fact my son used a lot in his youth; much to the annoyance of the anglers who had paid good money for the fishing rights.

Now, just because you are allowed to roam around the edges of fields doesn’t mean that the farmers will encourage this; in fact they will often actively discourage it.  To get across to the copse on our map we needed to scramble under barbed wire and climb over a gate that was  completely tied up with wire and rope. But we were not to be defeated!

We then found ourselves walking along the edge of a beautiful field of oats. We were a bit puzzled as the middle of the field had been harvested, but for about two metres at the edge the crop had been left growing although it was all battered as if an army of walkers had passed that way.  We didn’t think that was likely! 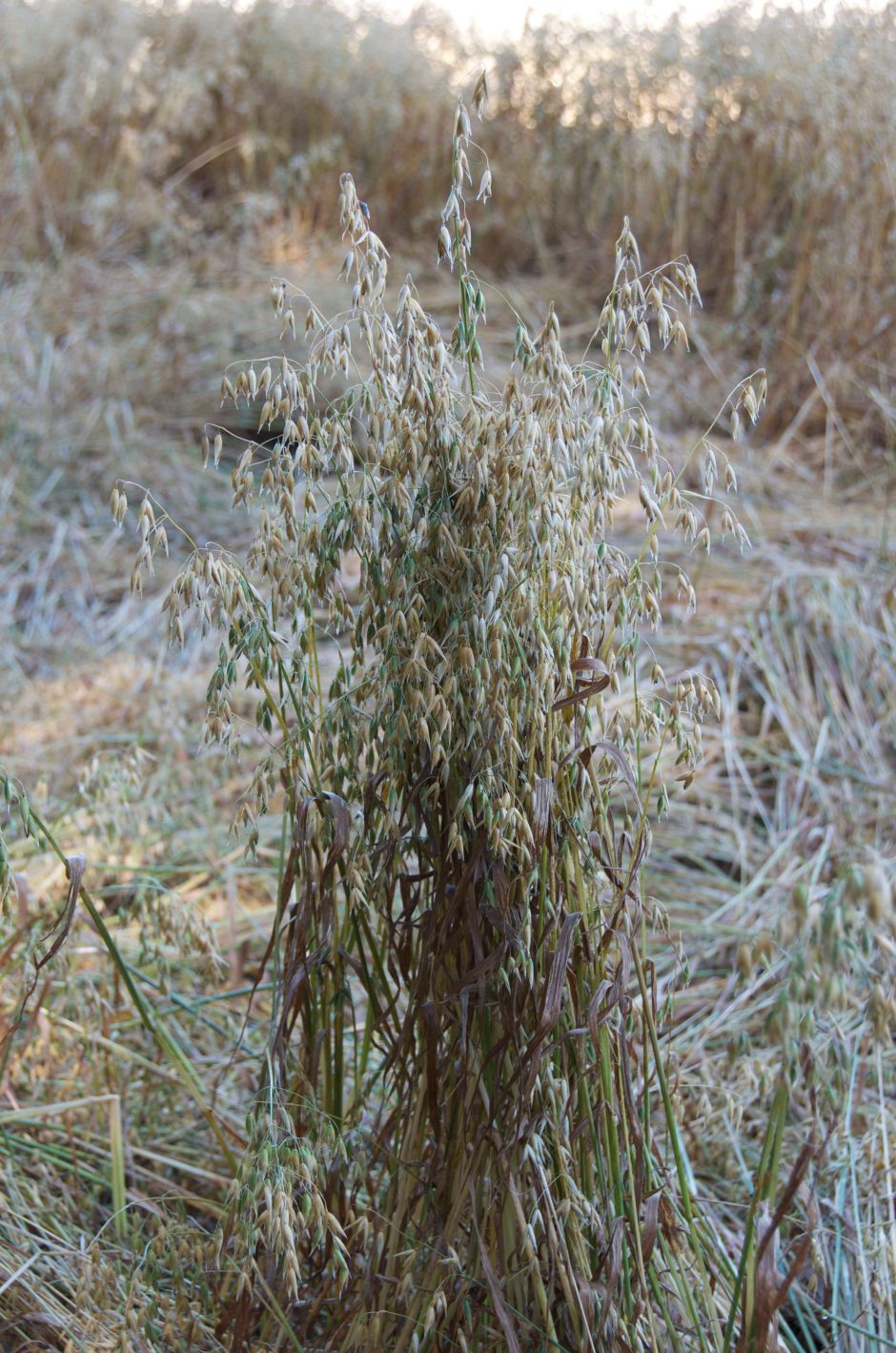 We later read that the edges of crop fields were often left as cover and food for wild birds such as quail.

The next part of the walk continued peacefully, though it was difficult to admire the views as we had to watch our footing in the very rutted field.

After crossing a small road we found ourselves in a wonderful wildflower meadow at the edge of another field of harvested crops. The predominant flower was chamomile (nobile, I think) and the smell as you walked over it was wonderful.

The edge of the field was also home to many other wild flowers and our party quickly divided into walkers and photographers. In fact the walkers thought the rest of us had mysteriously disappeared as they couldn’t see us when they looked back.  They didn’t realise we were probably just lying on the ground trying to get that elusive photograph.

The next plant we noticed was a beautiful red clover plant. The flower head was much larger than a normal red clover and a much deeper red. It was also growing on longer stems than typical clover.  When I looked it up it turned out to be red feather clover or Trifolium Rubens.

Hiding amongst the stubble we found the occasional delicate blue flax flower.

Then we found a flower I had never seen before, or never noticed anyway. I haven’t been able to identify it so any suggestions welcome.

There were lots of this flower which I think is red sorrel.

We finally tore ourselves away from the flowers and caught up with our rather anxious friends.

We found a few more wildflowers  as we walked alongside a ditch.

A rather scruffy red campion

The next part of the walk passed uneventfully and we made it to the small seaside village of St. Monans where we were going to stop for a coffee.

I know these are not wild flowers, but they did warrant a photograph. 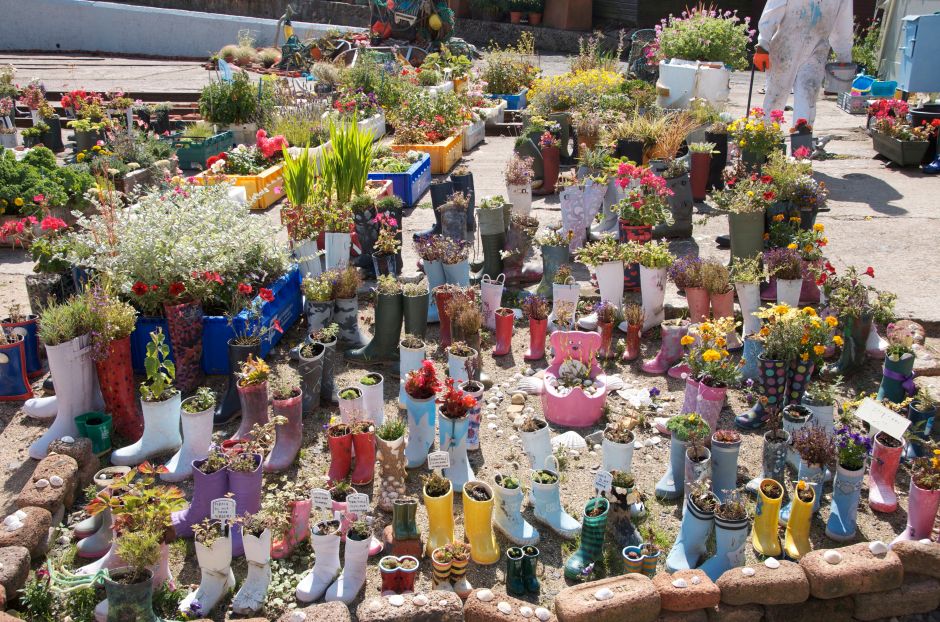 We then  followed the coastal route for a couple of miles. The tide was out so no danger of being cut off by the water.  There were plenty of sea birds to see if you had binoculars, but still plenty of wild flowers too.

This is one of my favourites.

And this, which I believe is Ladies Bedstraw, I hadn’t noticed before.

We made it to Elie in the nick of time for a rather late lunch: some delicious butternut squash soup and haddock and chips.

The walk back to the estate should have been easy, but we managed to get rather lost – well not exactly lost so much as having difficulty finding where the footpath went though acres and acres of fields and wooded areas. Thank goodness one of our party had a sat nav with him so we knew the general direction we needed to go.  We really needed to go straight across a field of barley, but being good country citizens we walked in single file where a tractor had already flattened the crop leaving us a footpath of sorts around the edge of the field.

It was heavy walking and by the time we got back to a real road we were feeling rather shattered.

Not too shattered to snap a couple more plants though.

Look at the beautiful colour of these sycamore keys. 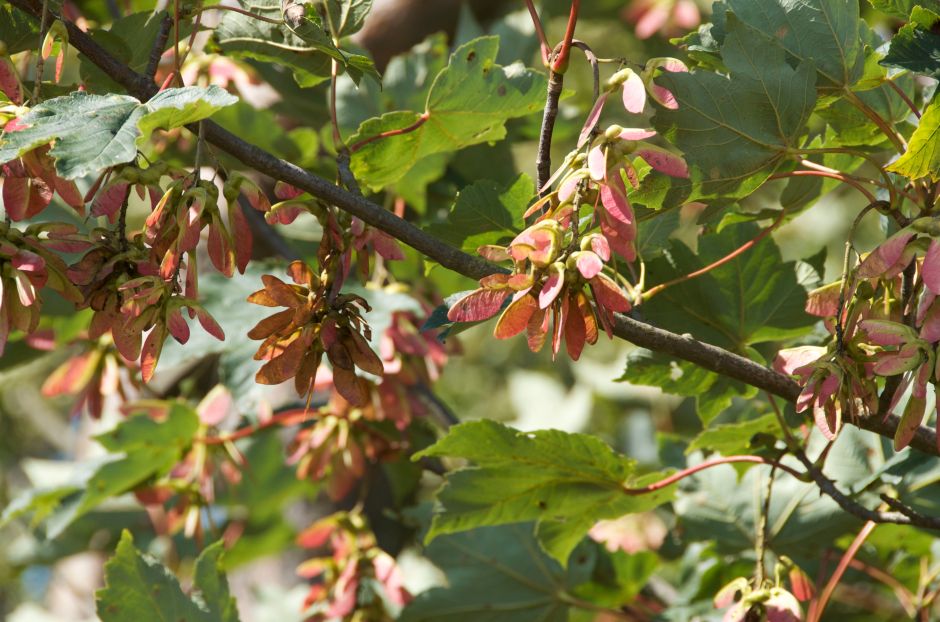 There were still some poppies about. 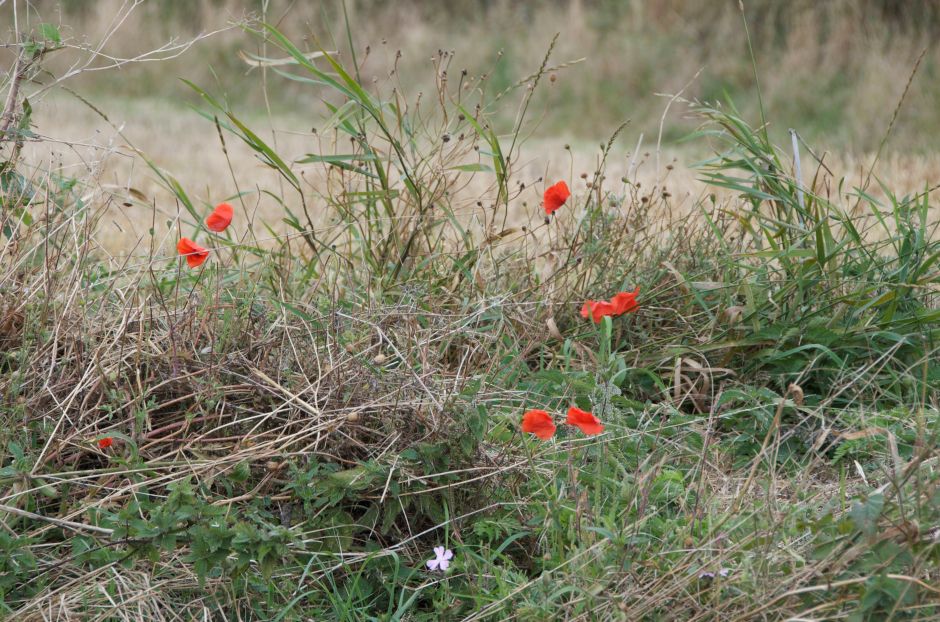 And a delightful white campion looking a lot better than its cousin photographed earlier. 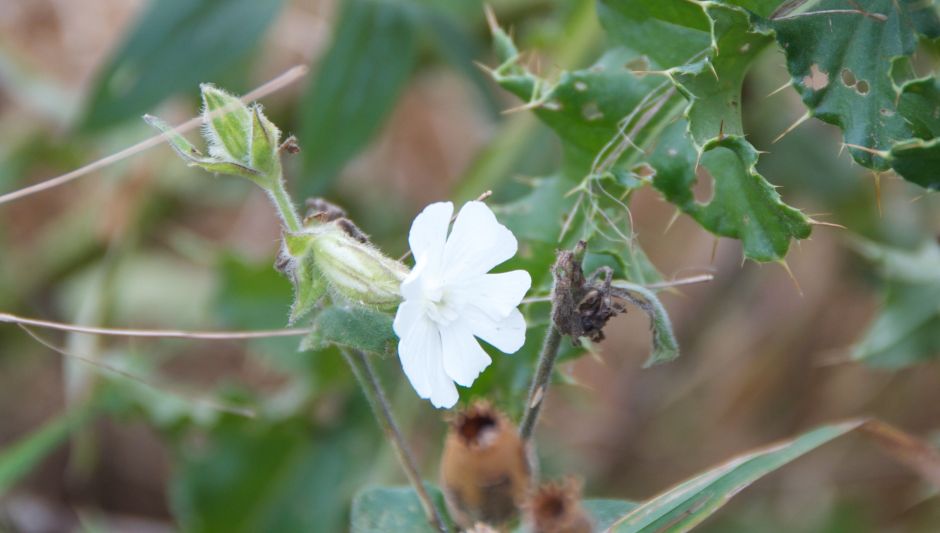 These are elderberries – I always recognise these as I spent many a happy hour gathering the dark black berries with my Dad, who used them to make elderberry wine. I would like to report it was delicious, but I was far too young to be allowed any.

We made it back to the house after walking (mostly) for 6 hours!

We were ready for a cup of tea! It had been a great day.

Thanks so much to Gail at Clay and Limestone for hosting this interesting meme on the forth Wednesday of the month.

16 thoughts on “Wildflower Wednesday – a walk on the wild side.”

Please leave a comment - I would love to hear from you. Cancel reply