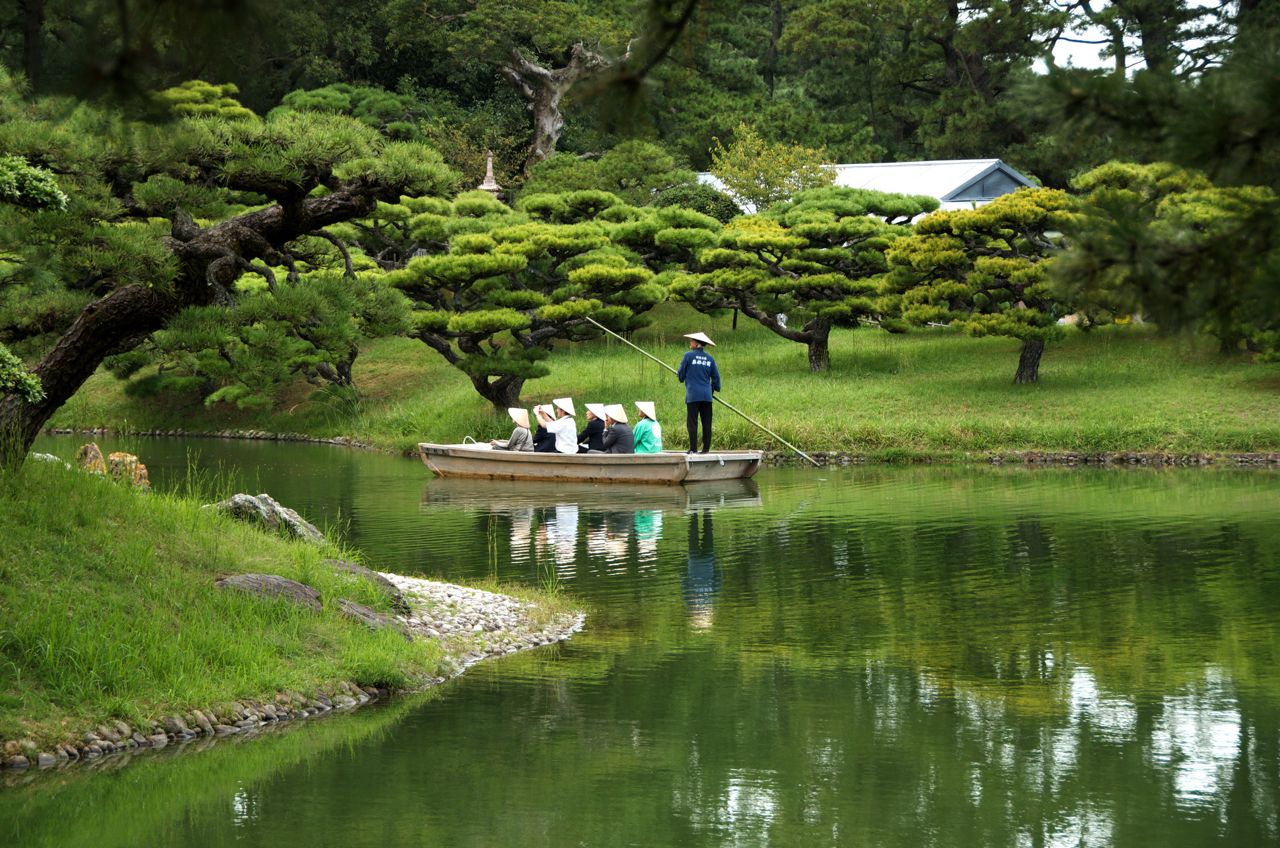 I have visited quite a few gardens in Japan over the last six years, but on our last trip, we visited one that I think was the most beautiful yet. 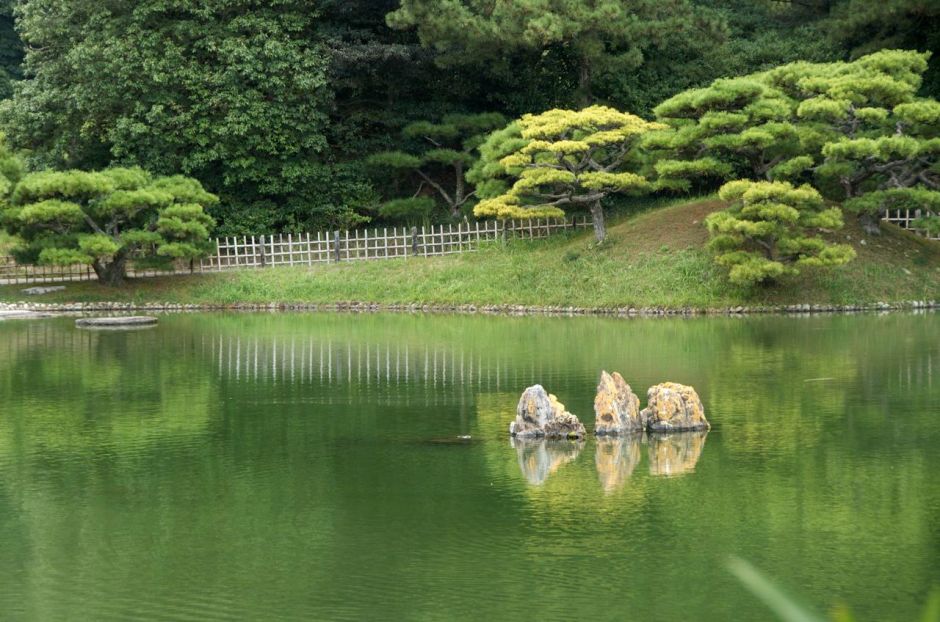 I bet this group of schoolgirls thought so too. 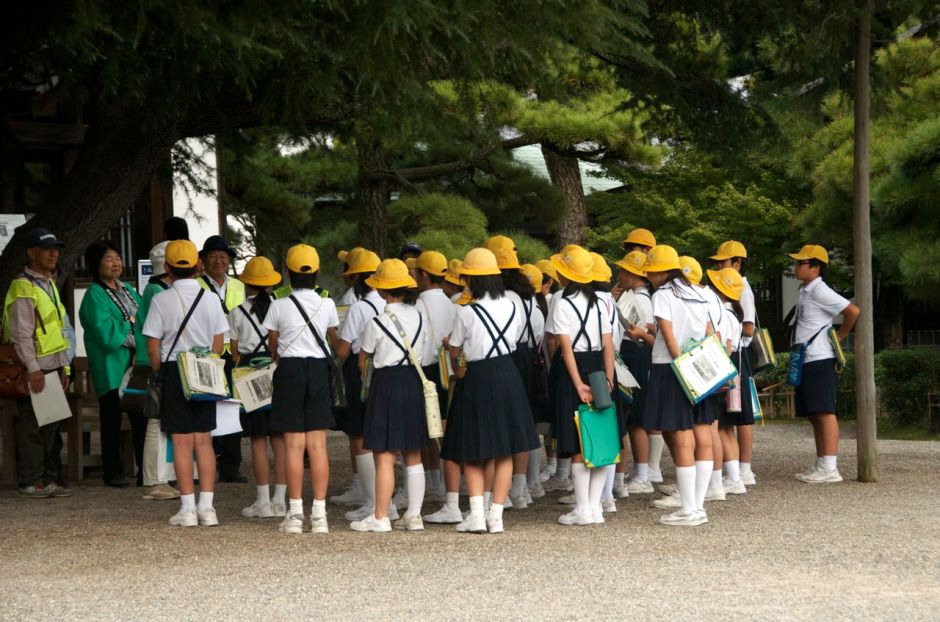 Ritsurin garden was created on the island of Shikoku over 300 years ago. It was created in the 1620s as a daimyo  garden by the ruler of the Kagawa prefecture, Taktoshi Ikoma.  Daimyo gardens are typically ‘strolling’ gardens centred on a pond and created by the feudal leaders (diamyos) during the Edo period from 10th to 19th centuries.  There were once about a thousand of these gardens as these leaders competed to achieve the best design. They were used for recreation and socialising as well as for more practical purposes such as diplomatic meetings, practising Samurai skills, and growing vegetables, rice and fruit trees. 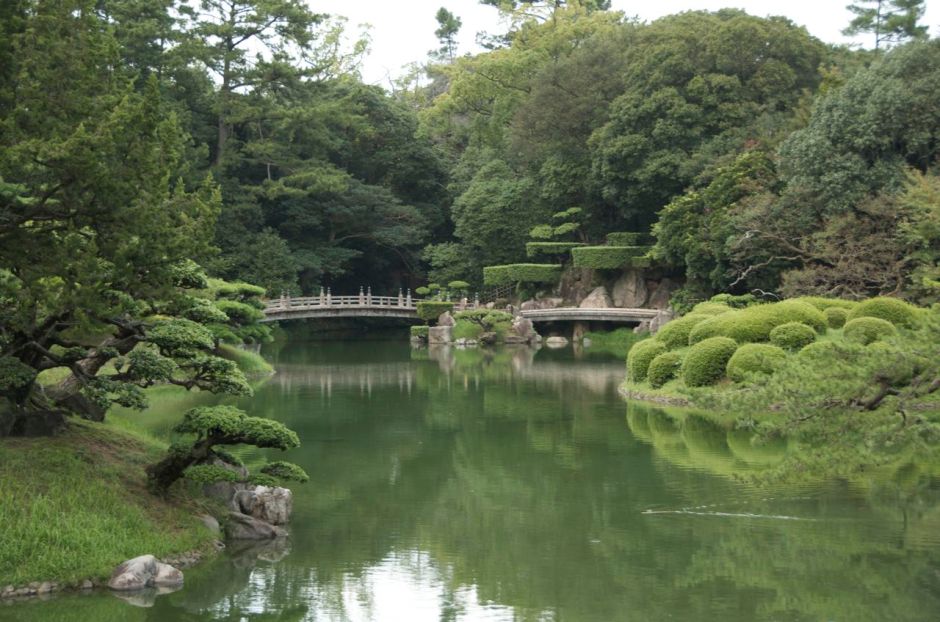 In the words of Professor Shinji Isoya

Creating a garden starts with enclosing a space, and in fact the English word garden originally refers to such an enclosure.

So we take a space, enclose and secure it, and build our ideal world, our Eden, inside. 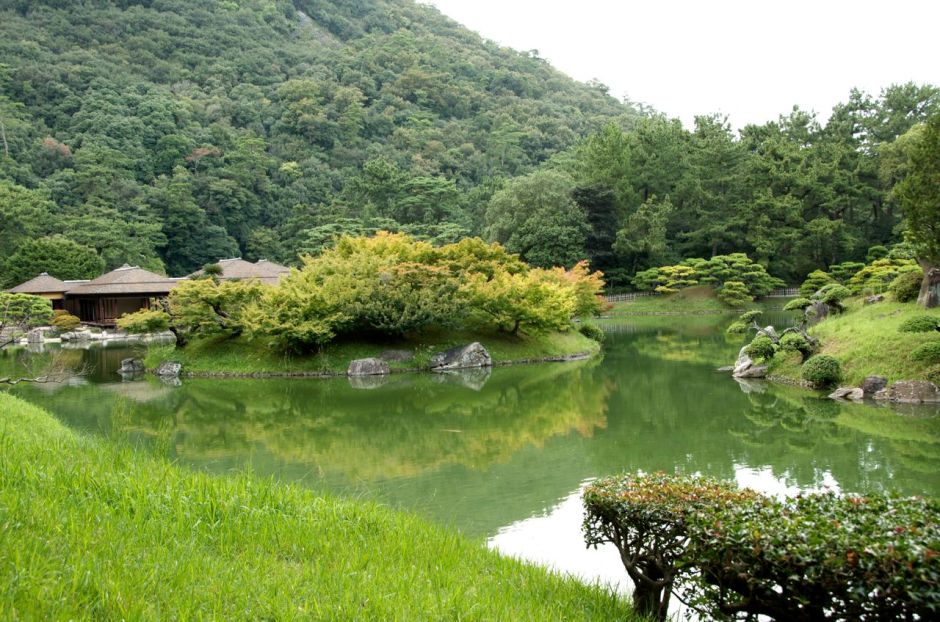 Japanese gardens are often designed to include the landscape that is outside the garden; Ritsurin was built at the bottom of Mount Shiun which adds to the beauty of many of the vistas. 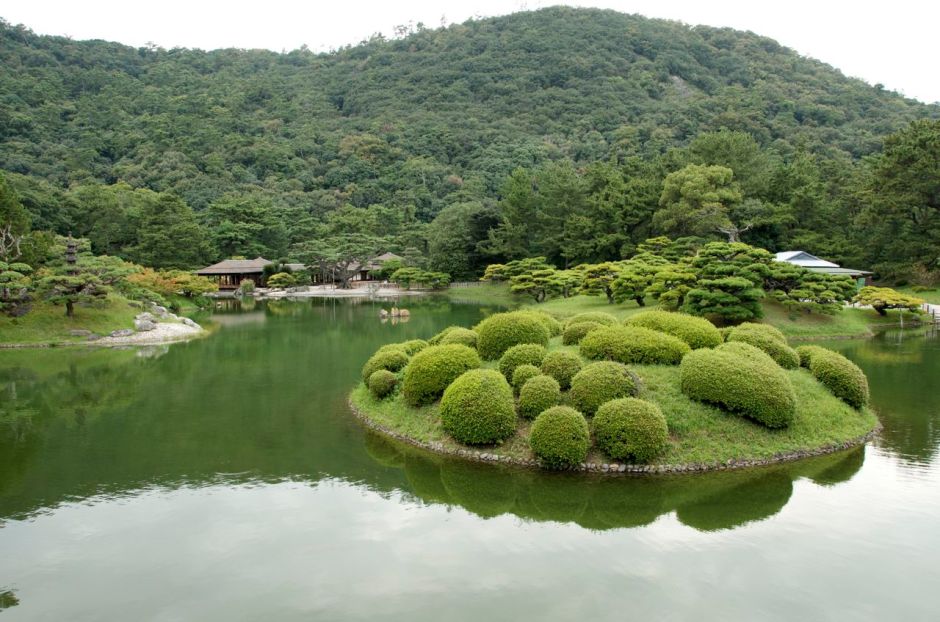 The  whole area is about 185 acres and it contains around  1400 pine trees. 1000 of these are pruned every year by 14 gardeners using Bonsai techniques.

As we were looking at the garden plan wondering where to go first we were approached by a volunteer guide, Masanobu, who offered his services free of charge. He was a delightful man, who obviously loved the garden and knew it very well. As he showed us round he told us lots of interesting facts that we wouldn’t have discovered for ourselves.

All the areas surrounding the winding paths are enclosed by a type of open fencing. Two different sorts are used in this garden. Every feature of a Japanese garden has its own meaning or symbolism.  The square fences mean that you should not cross this boundary, whereas for the hooped fences you still shouldn’t cross, but it is up to you i.e. it is more a matter for your own conscience. 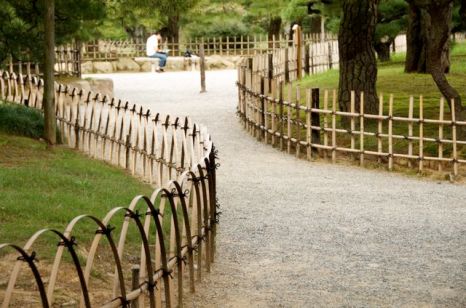 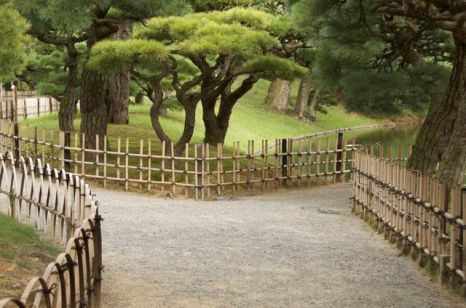 As we passed these fences we noticed a lady gardener tidying up the the fallen pine needles from a pebbled area – with tweezers!

We then saw an area where the pine trees had been planted by Royalty – four trees by the Japanese Royal family, and the centre tree was planted in 1922 by Edward VIII when he was the crown prince.

After that we came to a pine tree that is very special in the garden, the crane and turtle pine tree (Tsurukame-matsu). The way the branches of the pine have grown gives the impression of a fluttering crane standing on the back of a rock turtle. 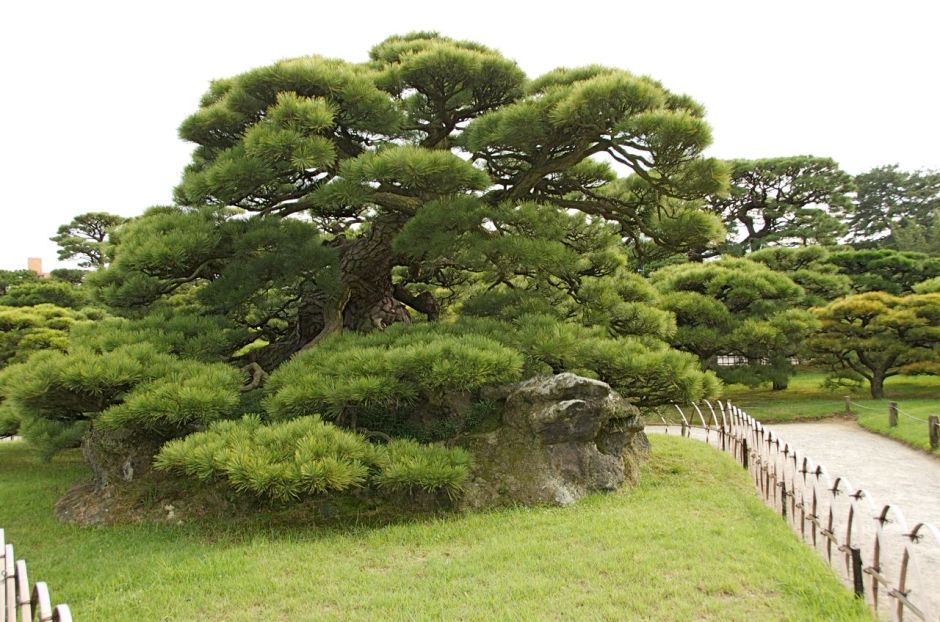 We learnt that there are two main sorts of pine trees in the garden – male pines and female pines. I don’t think this actually refers to the sex of the tree, but rather its appearance. The male trees had very sharp pine needles and a rough bark and the female pines had much softer needles and a smoother bark. 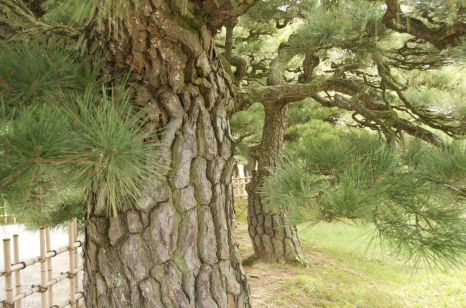 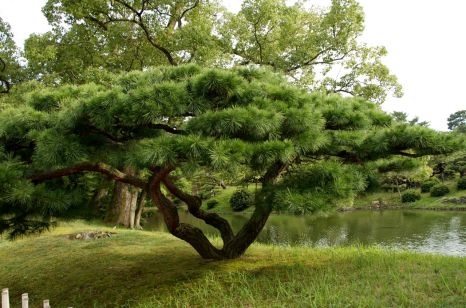 These cyads were received as a gift from the feudal lord of Kagoshima, some 300 years ago. They have been very well looked after. 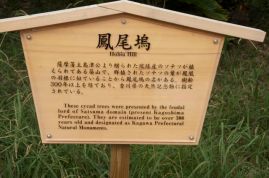 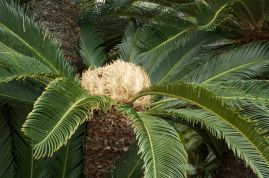 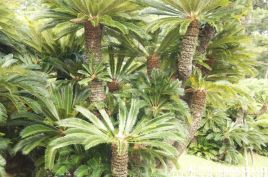 This is a traditional tea house. You can see the stepping stones leading up to the entrance. The idea is that as you step from one stone to the next you gradually leave behind all your worldly worries and cares. To enter a tea house you always need to duck under a low entrance.  This act makes everyone equal, regardless of their social status. Also Samurai warriors would need to leave their swords outside the door! 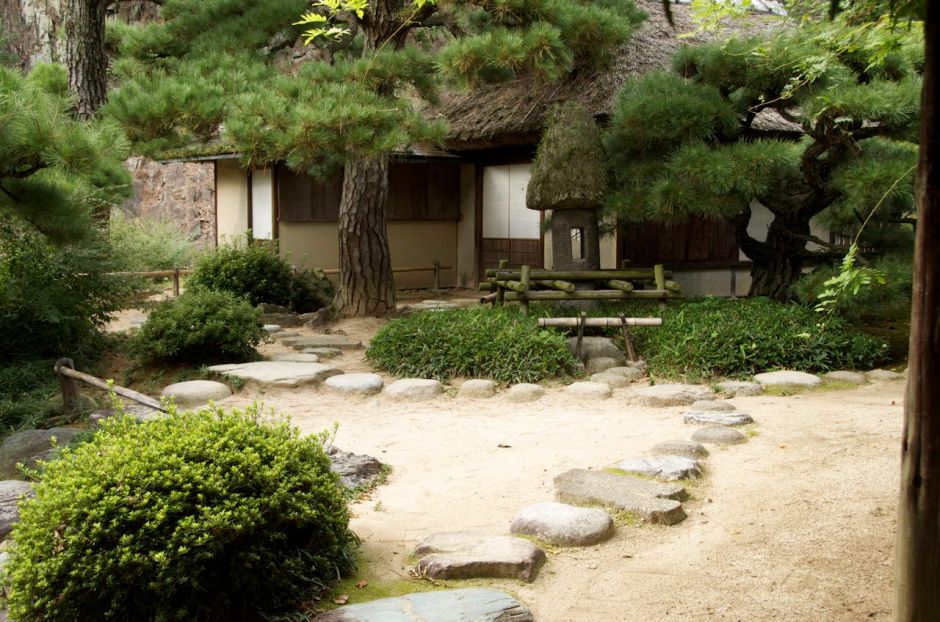 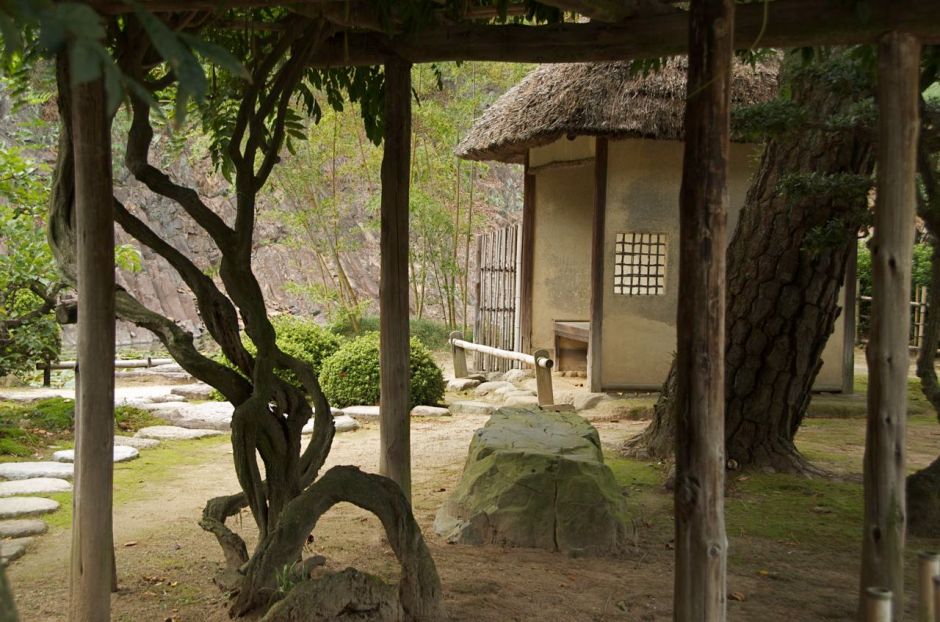 This zig-zag bridge leads over to a particularly holy place in the garden.  It is made like this as evil can only travel in straight lines and so can’t cross the bridge! 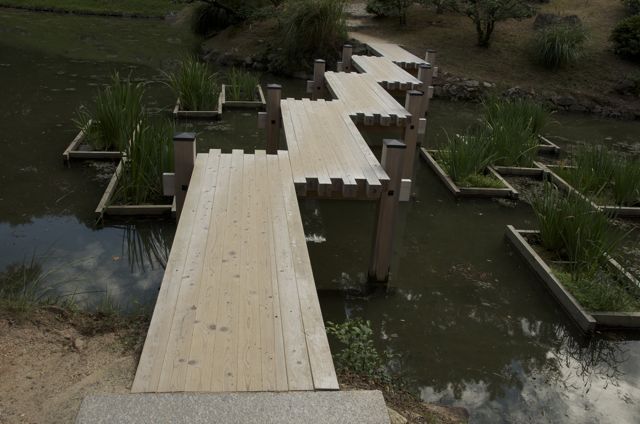 We then walked around the beautiful pond and admired its many reflections. 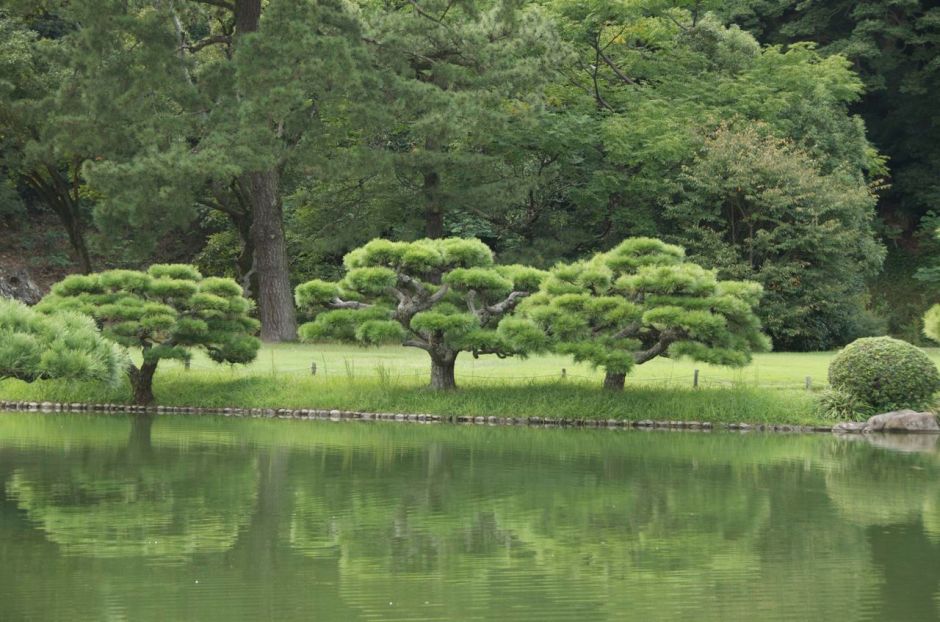 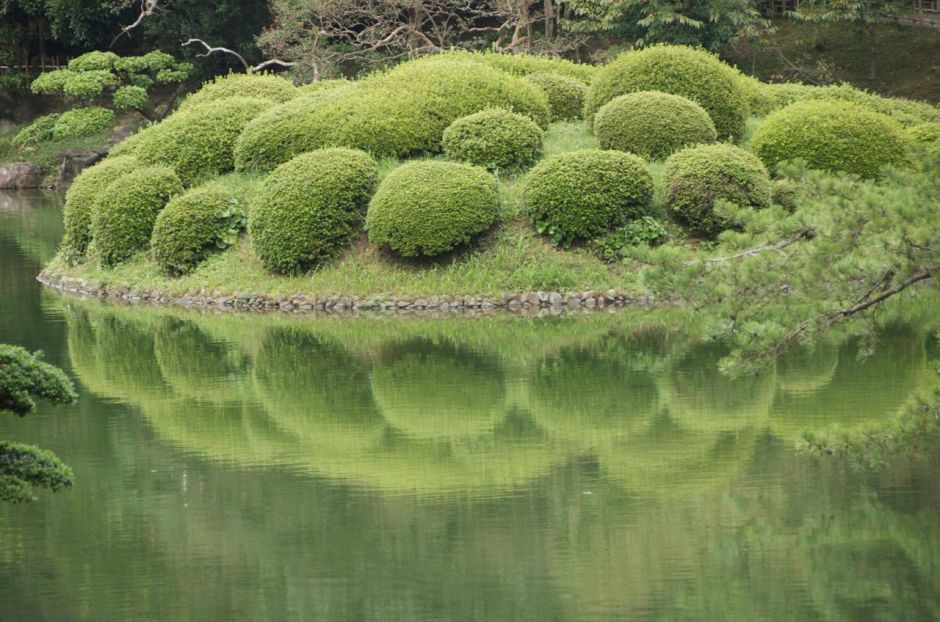 A mound at the far side of the pond is called Mount Fuji! It is common in this sort of garden to recreate beautiful landmarks, albeit on a much smaller scale.

It is the best place to see the wonderful views 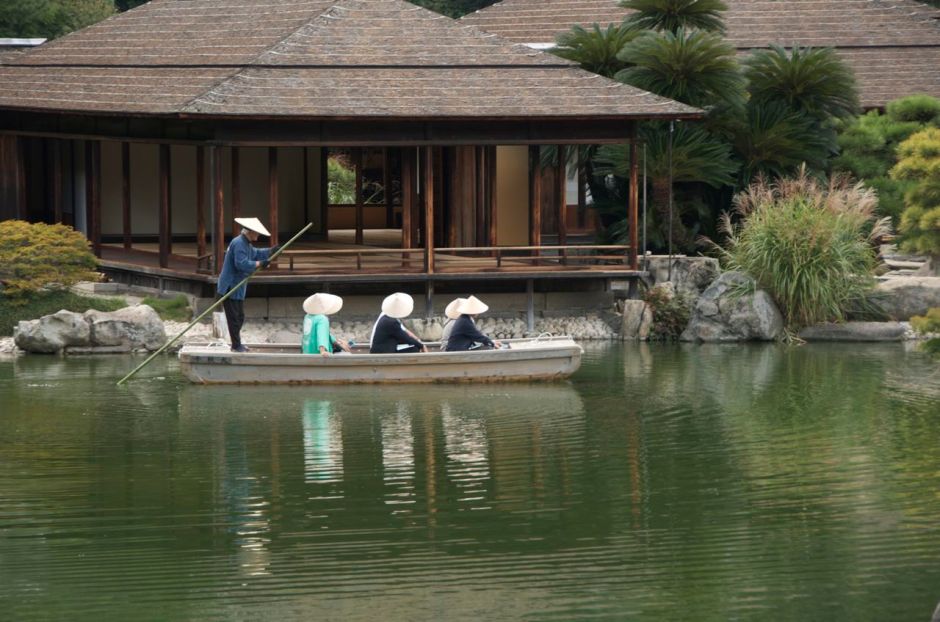 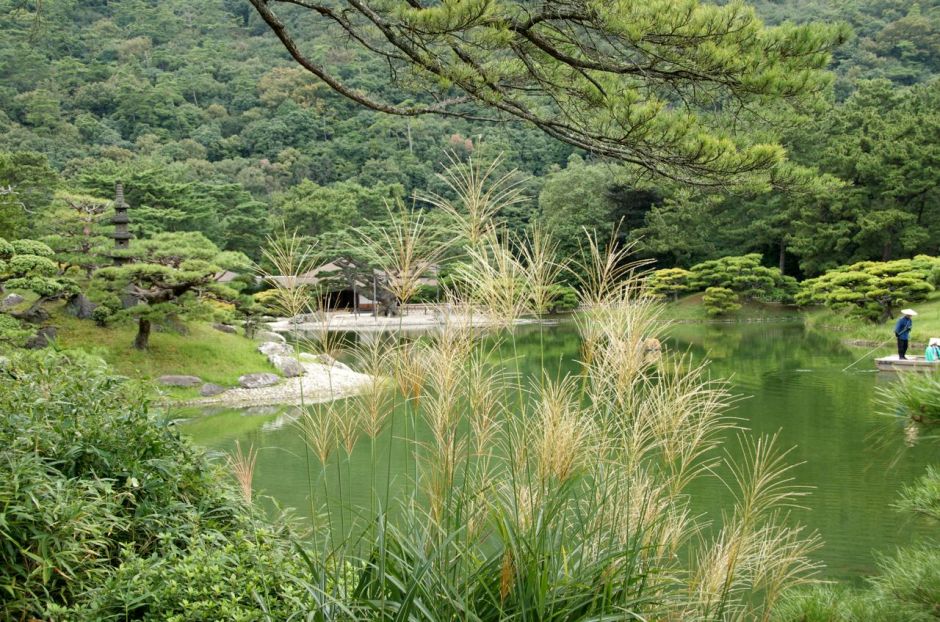 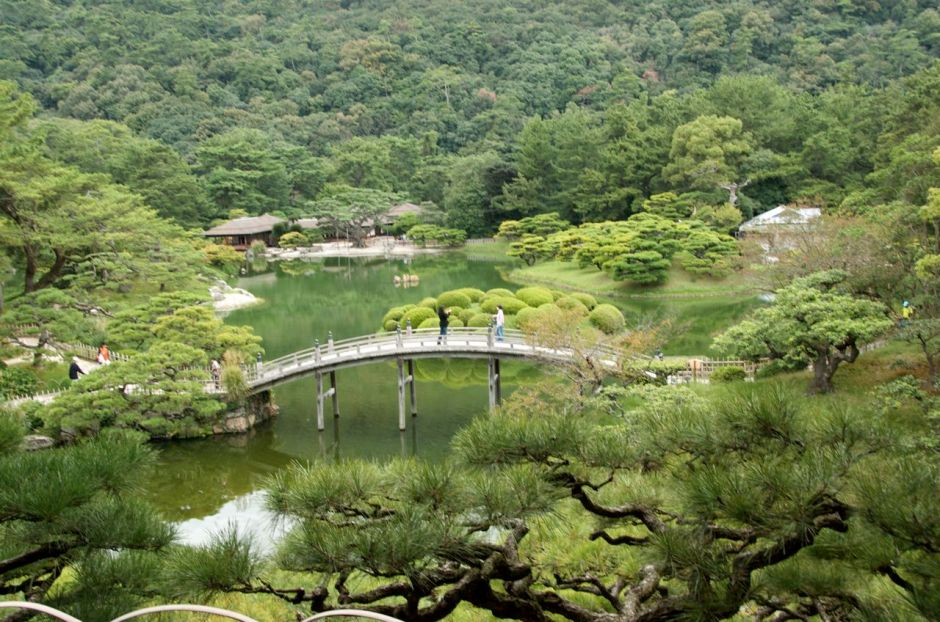 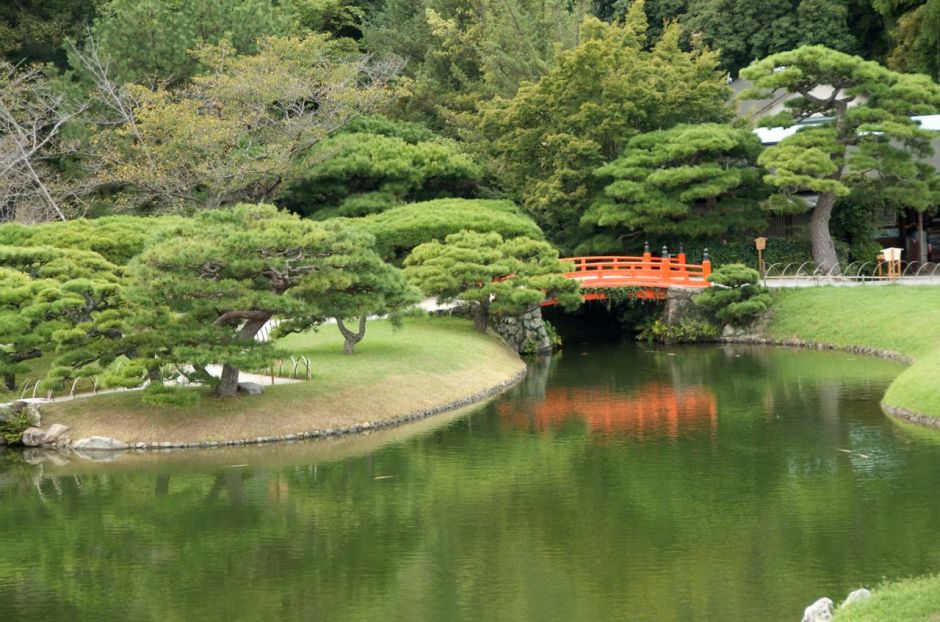 We spent about an hour and a half walking round the garden and had some lovely photos to show for it, and almost as many mosquito bites! However we only saw about half of the garden. At least we have a good excuse to go back next time. . . .

Please leave a comment - I would love to hear from you. Cancel reply